We're all about the Care!

A Group of Independently Owned and Operated Franchises

Co-founder and CEO, Richard Weatherman, takes a very personal interest in the home care industry. It was during the beginning of Richard’s business career when one of his coworkers fell ill and reached out to Richard for assistance. Ever compassionate and eager to help, Richard made himself readily available. At one point, Richard was so appalled at the living conditions of this individual that he volunteered, without pay, to take the man into his own home and be his personal caregiver. He drove his coworker to appointments, helped him run errands, and generally tried to brighten his friend’s life in any way he could. Thus began his foray into the world of in-home care.

Years later, a friend of Richard’s who owned a home care agency approached Richard about working with her company as a caregiver. She was impressed with Richard’s humanity and determination and thought of him as an ideal caregiver. During this time at the agency, he also met his future business partner, Piroska Zalkadi, a business development pro whose skills included identifying clients for the agency and overseeing caregivers.

After several years working as a caregiver and outside consultant, Richard knew firsthand all the issues and problems associated with running a home care agency. Eventually, he and Piroska, confident they could provide a more efficient and cost-effective way to care for their clients, opened their own agency in January of 2006 under the name Advantage Plus Agency in Canoga Park, CA.

During nine years of consistent successful growth, the business expanded to four offices in three different states. Using their proven system of providing a high level of quality care, they opened up Advantage Plus Franchisor, Inc. in Las Vegas, NV in March of 2013. On January 1, 2014, they converted the location in the state of Washington to Everlasting Us, Inc. franchise. In addition, the location in Canoga Park, CA became an affiliate of Advantage Plus Franchisor, Inc. conducting business in the same manner as a franchisee.

Today, AdvantagePlusCaregivers.com® thrives because of Richard's and Piroska’s shared values of compassion, personal care and attention, and treating each care recipient, staff member, caregiver and associate as family. 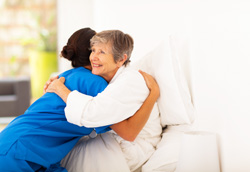 
We're all about the Care!